The album review of  Balthazar is now available on our website. Of course we also have selected the most interesting alternative releases and compiled them in our CHAOTIC TWENTY playlist. Three of the twenty songs are highlighted. Quickly scroll down to see which ones! 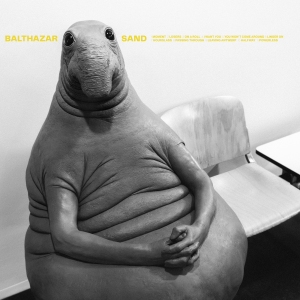 Two years after the comeback of Belgium’s best band, a new release by Balthazar appears: Sand. With the previous album Fever, the band had completely reinvented itself. Read the entire review by clicking on the image.

Every week we highlight a few songs that you should absolutely listen to. In week 8 these are:

Genre: Brit rock
FFO: Handsome Poets, The Vices
Listen because: Orange Skyline is back with a bang! After a period of silence, the four gentlemen from Groningen, The Netherlands, have been signed to Sony music. Shine on is the perfect introduction for new listeners but also feels like the next natural step for the band. The song feels like Britrock circa 2007 (think Dandy Warhols and Blur) but then put into 2021. Sometimes, taking a little break might be a great idea. Shine On makes us hungry for more.

Genre: slowcore
FFO: Nick Cave, David Lynch
Listen because: this song gets under your skin and shows the other side of Dripping Trees, that of the shadowy twilight zone between dreaming and waking, and because it makes you curious about the debut album that will be released in a month’s time

Genre: symfonisch goticrock
FFO: Epica, Within Temptation
Listen because: the song sounds dark and accessible at the same time and the multi-sided voice of Zora Cock fits in perfectly with it

Find the best new alternative releases in our CHAOTIC PLAYLIST! This week with new tracks from @robinkester_, @palewaves, @BullTheBand, @DavidKeenanmuso and more!

Listen on Spotify via the link below 👇

We reviewed the new albums from @sopharela and @whereisMUNA and they're now available on our website! Give it a read and a listen and enjoy your Tuesday evening.

Last week @VESTROCK took place in the Dutch town of Hulst, we were there and highlighted our favourite artists for you.

Happy Friday! You can now read our thoughts on the new albums from @E_E_, @soaksoaksoak and @porridgeradio on our website, access them via the link below!

Team CHAOS hopes you have a lovely weekend 🤩